Not the entire Dolomites’ area are UNESCO sites; only nine groups of mountains are recon as Humanity Heritage in this area. All around these groups there is a buffer area that’s specific only because is very near to a UNESCO world heritage sites.

Precisely the UNESCO sites are extended over 14.1908 hectares, this is considered the core area, and includes eighteen peaks. All around the proper site there could be a buffer area which could be irregular and not very large, its extension is of about 89.267 hectares. 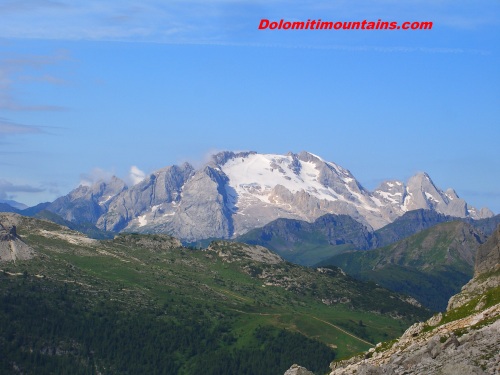 Buffer area isn’t under the World Heritage safeguarding, but it does exist because of its useful and it’s needed to keep the natural and essential characteristics of the core area. This way the buffer area is important to preserve the morphology and the landscape of the Dolomites, avoiding to menace or injure their value. This area had been decided at the same moment in which it have been included in the Humanity Heritage . As usual it begins from an altitude of 1500 meters and the 90% of it is included in natural parks so it’s protected by local preservative laws. The organaisation does not set any condition, this mean that this zone could be visited even spent time in a comfortable hotel.

The nine UNESCO Sites of Dolomites

Dolomites’ Humanity Heritage is made precisely by nine sites, divided among three regions and five provinces of Italy. The sites are called with specific name then. The first one is Pelmo Croda da Lago totally in Belluno’s province; it included many small groups of mountains. The second one is Marmolada, the highest peak of all this mountains and because of its highness it is called The Queen of the Dolomites. Another group, very large and jagged, is called Pale di San Martino, San Lucano, Dolomiti Bellunesi, Vette Feltrine and is divided between Belluno’s province and Trento’s. It looks like a parabola with the Agordo’s territory in the middle. The fourth group is Dolomiti Friulane e d’Oltre Piave (Friuli Dolomites), it is in the far east of the Dolomites in the provinces of Belluno, Pordenone and Udine between the rivers Piave and Tagliamento: maybe it’s the wildest area all over these sites. The fifth group, Northern Dolomites, is the largest area and includes famous peaks such as Tre Cime di Lavaredo. Northern Dolomites are extended over the valleys of Pusteria, Badia, San Cassiano, Boite. The sixth group is Puez Odle, entirely in Bolzano’s province, it’s in the far west of the mountains, not very large but with a high geological importance. The seventh group is Sciliar Catinaccio between Trento and Bolzano includes fascinating mountains such as Vajolet Tower. The eighth group is Rio delle Foglie or Bletterbach, it’s the smallest area, in Bolzano’s province, characterized by a Grand Canyon, vivid proof of million of years of the geological history of the Dolomites. The last group is Brenta Dolomites island of Dolomites among the granitic mountain in Trento’s territory developing as an ideal spinal column.