Dolomiti Unesco have been declared Dolomites on June 26th 2009. Nine groups of Dolomite mountains distribute among the provinces of Bolzano, Trento, Belluno Udine and Pordenone are now the United Nation World Heritage. The territory spanned 142,000 hectares and given 85 hectares of border areas for a total of 231,000 hectares.

After four years of intensive work the Dolomites have joined the list of the UNESCO World Heritage. Dolomites mountains are some extraordinary and interesting places that lots of people know all over the world. Dolomites are considered cultural and natural wonders for World Heritage and now included in UNESCO sites. Dolomites have a relevant and unique geological heritage, as relevant and unique are the beautiful scenery that every one on the Earth could be proud.

The importance of this acknowledgement from UNESCO, the United Nations Educational, Scientific and Cultural Organization, is clear, if we consider the purpose of this international organisation. UNESCO try to encourage the identification, protection and preservation of cultural and natural heritage around the world considered to be of outstanding value to humanity today and for the generation of the future.

This is the first time a territory so huge and divided in several local administration, has been included in the list of the United Nation World Heritage. 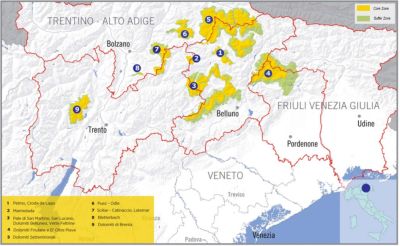 Thise picture has been taken from the web site of Fondazione Dolomiti Unesco: www.fondazionedolomitiunesco.org

There are two reasons that convinced the international commission to include thise mountains into the list and make Dolomites UNESCO. The first is to be a unique, superlative natural reality, with a singular and relevant beautiful mountain scenery. The other reason Dolomites are very important witness of the story and the geological development and transformation of the Earth.

UNESCO supports Dolomites like the most important mountain landscape all over the world. Relevant are the shapes of this mountains whit spires, pinnacles and towers that stood out against the sky. Groups of mountains that created huge landscapes, or singular and isolated mountains create a contrast whit valleys of forest and plateaus.

One other factor of relevance are the marks of hundred million years of the evolutions of the planet. Different kinds of rocks and stones have been impressed by erosion of water and wind, from glaciations and geological movement of the subterranean platforms.

The inhabitants of Dolomites areas are very proud their mountains are now Dolomiti UNESCO. During eight thousand years people had been able to live in harmony whit this environment, even if it was difficult. People preserved the territory avoiding hurt it.

UNESCO do not claim environmental restraints. There are several Natural Parks among the five provinces. The territory is not under any threat. Tourism and any other industrial activity will not stopped or restricted by the new status of Dolomites. New projects of integration and cooperation will be improved considering the cultural differences among the inhabitants of Dolomites. A new approach to the tourism will be necessary, in order to preserve and respect the needs of the mountain and avoid the depopulation of some areas of the Dolomites.

In order support this intentions the provinces, the 13th may 2010, have built up the "Dolomiti Unesco Foundation". Which purpose is preserve and spread the huge Human World Heritage. The firs three years the foundation will be in Belluno province, now is in Cortina d'Ampezzo, than in Bolzano province and avery three years it will turn in other towns of the five provinsces.