Selva di Cadore is an ancient alpine village in Val Fiorentina and at the foot of Mount Pelmo. The village is located in the high agordino but the administrative territory belongs to Cadore area. It has ancient origins and for millennia the local people has been dedicated to agriculture and pastoralism. Always formerly the town experienced new life with the discovery of iron mines in the nearby town of Colle Saint Lucia. But the real revolution would come to this day, with the discovery of this places from visitors, it was the tourism.

The town, though small, is situated in a strategic area of the Civetta ski area, a very large area with 80 km of ski slopes. From here you can go skiing to Alleghe or in the area of Zoldo valley. The village of Santa  Fosca is the gateway to this circuit. This is part of the large Dolomites Superski circuit. 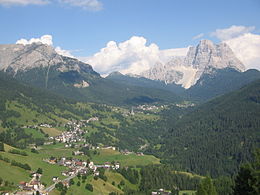 A long and ineresting history in Selva di Cadore

In addition to its enchanting woods and pastures, the village welcomes the Vittorio Cazzetta museum, which houses the skeleton of the famous Man of Mondeval. It is a very ancient burial found in the homonymous valley and dating back to an era of about 7500 years prior to ours. The museum offers an insight into the lives of men who lived over 7,000 years ago, with their uses and lifestyle.

Also in the museum are preserved various fossils dating back to prehistory, sometimes even finds of ancient beaches of 250 million years ago. There are also the casts of dinosaur footprints found at Mount Pelmo.

It must be added that the museum was not randomly named Vittorio "Vittorino" Cazzetta, in fact he was the discoverer of the burial of Mondeval, as always the discoverer of dinosaur footprints. Disappeared in 1997, at the age of 49 he lost his life during one of his explorations.

The village has dedicated its museum to the last of the explorers of the Dolomites.