San Vito di Cadore lies along the Boite valley, on the boarder with Cortina D’Ampezzo, the distance between the two cities is just 10 Kilometres. The first thing that you can see when you arrive in San Vito di Cadore are beautiful mountains Pelmo and Antelao. This mountains surround the town. Going from San Vito to Cortina you can see two other mountains Scotter and Marcora standing on the right.

It’s easy to see underneath the mountains along the town a lot of fir trees. The wood crosses the valley from one side to the other beyond the river Boite. San Vito is a small town of many years. The Traditional jobs ware carpenter, blacksmith, lumberjack etc… In the last 10 years things changed, nowadays San Vito offers a lot for tourists, there’s a lot of hotels, restaurant’s, and equipped skiing areas. Cadore hotels are many and you can find the quality you need, you can say: it’s a nice hotel San Vito di Cadore! 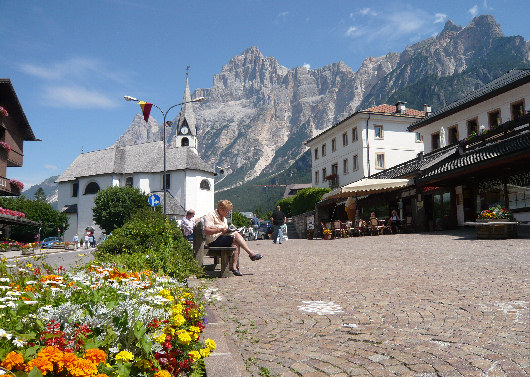 During the summer you can do excursions with mountain bikes on the bicycle path from Calalzo di Cadore to Lienz - the path runs close to the centre of San Vito - or up to the hill reaching the alpine refuges very close to the mountains. If you prefer something easier and relaxed, you can have nice walk’s in the wood and have a picnic near the lake, with its area suitable for children where they can play. You can also take a stroll on the panoramic road that crossess the bridge from Chiapuzza to Serdes.

For people with experience of excursions on high mountains there are lots of opportunities. Fascinating routes are easy to reach from the centre of the town, where you can practice climbing and see the Dolomites from the top. Two comfortable alpine refuges provide you a good relief, San Marco and Scotter. Without leaving the city you can visit the church Madonna of the Difesa and the ethnographic museum.

During the winter you can’t miss to ski. San Vito has a lot of tracks for the people that want to pass a day in relax and happiness, it’s possible to practice also snowboard. San Vito has a ski school and a shuttle that connect the town centre with the ski area. In San Vito it’s possible to practice cross skiing as well. San Vito is part of the big circuit of Superski Dolomiti. All of this profound place always sunny and lovely, where you can see the spectacular Dolomite mountains.

Since 1947 there’s the free association Polisportiva Caprioli that organizes, for children and adults, ski meeting, athletic and fitness activities all year long. This association has a relevant role to promote sports in such a small mountain town.

We can say San Vito has played a part in human history. In 1987, in an area called Lastoi De Formin near Pelmo Mountains, a skeleton was found after 7000 years. It was an ancient hunter. The grave is the most ancient ever found among the mountains.