Alleghe
And its famous Lake

Alleghe is a village in the Belluno district. It is situated in the Agordo valley, south of the Marmolada, and behind you can see Civetta, on the back the Zoldo valley. Along the valley flows the Cordevole stream, that from the Pordoi Pass and merges into the Piave river after a route of about 50 kilometers. What defines this village is it’s lake. Today, however, this lake is a major attraction for the country.

The centre of the village changed in the year 1771, because of a landslide from Monte Spiz which covered up a large part of the village. The amass of rubble made as a barrier to the Cordevole stream which was forged in more than two hundred years ago, the lake as we see it today. During the summer there are numerous sporting activities, from kayaking to windsurfing to others.

During the summer Alleghe is also known for some sporting events which have taken over the years an international concern. The Civetta Superbike is a distance race to go riding to mountain bikes. Then there is also the Civettissima a race, always riding a mountain bike, but the peculiarity is that it's night race. Also of note was another race to run the now famous Transcivetta, which takes place in pairs and that has come to have up to two thousand participants. 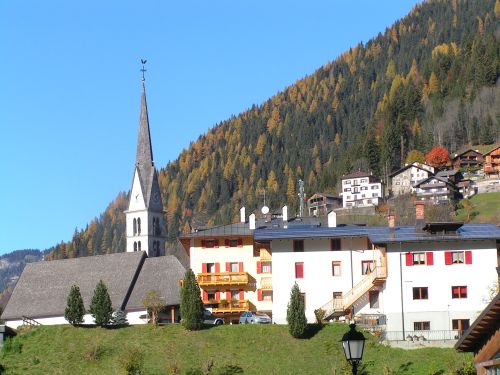 It’s worth a visit to the church, rebuilded after the disaster to replace a much more antique one. Inside there are frescoes of Valentino Rovisi, who was a pupil of Tiepolo. In the nearby building, centre of the city hall, you can admire an awesome arras; an opera of a painter of the nine hundred.

On the riversides, other than the walks, during the winter you can go scating. The town is a community with lot’s of fractions, the most known is Caprile. All the area is a holiday destination during the summer and the winter. With it’s 80 kilometers of sloaps and 28 lifts, the village is well-known for it’s skiing and is part of the Dolomiti Superski. With the skis you can reach Selva di Cadore and even in the Zoldo area of Palafavera passing through the Civetta area.

A lot of the visitors do excursions to the Adolfo Sonino refuge or Coldai refuge or the Attlio Tissi refuge, both in the Civetta group, and to the Fernazza and the Col Davagnin. The village has a famous hockey team with a well equipped ice skating building. Also on the lake you can skate during the winter on its frozen surface.