Cortina dAmpezzo
The Queen of Dolomites

From the beginning of 1900, Cortina dAmpezzo with its marvelous position and the charm of its mountains became the Queen of the Dolomites.

Has it ever happened, that when you approach a particular place you feel an emotion deep within you? This is what happens when you arrive in Cortina dAmpezzo! At the end of the narrow Boite valley, just after the bend, the view becomes better.

You’ll see a large green valley with mountains all around high and massive. Then you understand what you were feeling, its that type of pleasure that you can mark with just one simple word: beautiful!

Cortina dAmpezzo is the last village in the Belluno district before arriving into the Pusteria Valley. It has all around some of the most beautiful mountains of all the Dolomites, like the Pomagagnòn, the Tofane. The Becco di Mezzodì, the Faloria and the Cinque Torri. 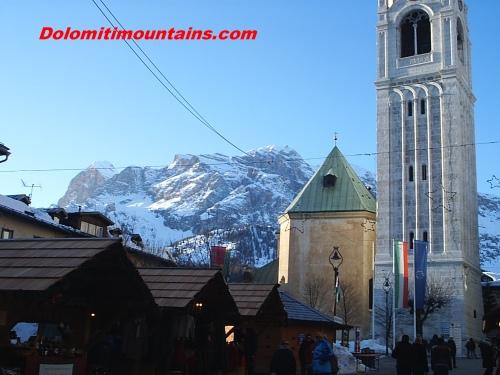 This town is one of the most exclusive mountain resorts of the whole world, to proof this is the fact that here the winter olimpics of 1956 took place. All the visitors that arrive from everywhere, during the Summer and the Winter, have the chance of passing the best holiday of their lives, choosing one of the Italy vacation packeges.

The town is also part of the circuit of the Dolomiti Superski, whit its Ski Cortina. There's the chance to practice every Winter sport: from curling, downhill skiing, to the cross-country skiing, telemarking, snowboarding and ice-skating in the great skating palace, at last but not the least Cortina has a bob sleigh, other than having the only Italian bob factory.

The village is surrounded by ski-slopes, slopes that satisfiy ones needs. The number of slopes is sensational: 78! During the summer the chances of going on excursions and high mountain climbing are huge. Cortina becomes a great starting point to reach the beginning of the vie ferrate or for climbing the mountain faces. Even the first world war left its signs, with the tunnels digged in the rocks, although these have been restored and now can be seen. There are also many alpine refuges that can be seen in the area.

Many things to do in Cortina dAmpezzo

Cortina has a swimming pool and, beside this, it is along the Lunga Via delle Dolomiti: a cicling track that starts from Calazo di Cadore, along the old railway track that used to arrive to Dobbiaco, and it finishes at Lienz in Austria. This track never reaches inclinations that exeeds 2% and in the Winter becomes a long cross-country trail.

There are many happenings that are held during the year. In the summer, more than all, are held local parties, the Festa delle Bande Musicali (parties of the musical bands), which arrive from all over the alps. There are many meetings that take place in Cortina, with actors, artists, and politicians that arrive in town staying in a Cortina hotel. These meetings have become very famous in Italy.