Brunico Gallery shows some pictures of Italy. Brunico is the cultural centre of the Pusteria valley. The town is a mix between modern and ancient style. The city centre is of the middle ages. That's why you can see the centre street is surrounded by colourful houses and the buildings have wall paintings of any time. There are many services for the citizens and all is made for them. In this city the majority of its inhabitants are German speaking. This little city is in the middle of the Pusteria valley, about half way between Bressanone and the Austrian border, as well as the link of the Tures and Aurina valley.

Brunico is surrounded by beautiful peaks, amongst which the Zillertal Alps, which heights touch three thousand meters.

There is also the chance of doing cross-country skiing, with the possibility of having lessons. In Brunico you can also go ice-skating in the building where, when it is closed to the public you can watch ice-hockey matches or even go down a slope with a sledge. 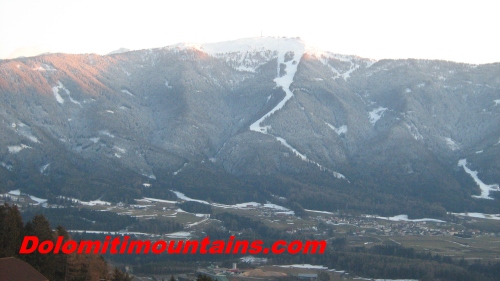